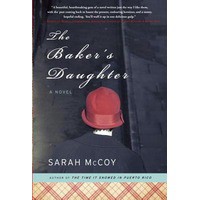 In Sarah McCoy’s novel, The Baker's Daughter, you'll find lots of historical data about the daily lives and fears of German women living during. You'll also get an insight in how to operate a bakery when flour and sugar are almost nonexistent and only doled out by Nazi operators. Women are a commodity controlled by Nazi dogma and the fear of being punished by the ruling military. Elsie is a young girl working in her father's bakery when an SS officer twice her age invites her to a Nazi party. A young Jewish boy comes to her rescue when another officer tries to assault her. Her sister Hazel is proud to support the Nazi regime by producing Aryan babies for the program. Her life takes an abrupt turn when one of her children is considered not worthy.

The story switches POV back and forth with Elsie in WW2 Germany, and then to Reba 60 years later in America. The more modern story deals with Reba’s concerns about her boyfriend and her job as a journalist. This type of writing device is difficult to pull off when the reader bonds with one character and not the other—as was my case.

Regardless of the structural difficulties, this is a poignant look at women’s roles in wartime Germany. The pastry recipes in the back of the novel are an added bonus.