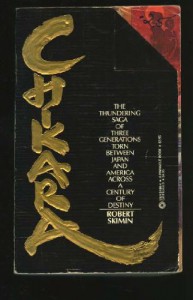 Robert Skimin’s historical novel, Chikara, is an epic family drama of the two great countries, America and Japan. It spans from 1905 through the 1980’s and covers the early American racism against the Japanese settlers of California, the anti-American sentiment in t Japan, the forced resettlement of Japanese people in American war camps, the bombing of Pearl Harbour as well of the dropping of the atomic bomb on Hiroshima. These historical events shape the characters’ dreams and ambitions, their lives and their spirit.

Sataro of the House of Hoshi, driven by his ancient samurai blood, has left his beloved Japan to seek his dream of power in America. His descendants will suffer the aftermath of his vision and as they too try to forge their own newer dream.

This a story that pays tribute to the Japanese Americans who persevered in the face of racism and established their cultural communities with hard work, honour and patience. Highly recommended historical reading!